July 19, 2020
Published 2020-07-19
Updated 2020-07-21
Four years ago, the 2016 Republican Party presidential primaries were characterized by a contest in which it had become necessary to express antiscience and anti-expertise opinions on climate change in order to have any chance of winning the Republican nomination for president of the United States of America. How did the Republican Party arrive at such a low moral and intellectual point? Author Shawn Otto tells this story and many other antiscience stories in his book The War on Science. 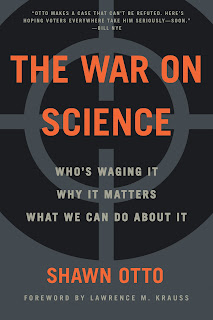 Otto's book was officially published in May 2016, but he had finished writing it before voting began in any of the 2016 caucuses and primaries. At the time of writing, Donald Trump was just one of several candidates campaigning in the Republican Party's presidential primaries, alongside Ted Cruz, Marco Rubio, John Kasich, Ben Carson, Jeb Bush and many others. When Otto's book came out in May 2016, we were six months away from the November 2016 Presidential elections. Yet, the anti-expertise and antiscience fertile ground that Trump was later able to exploit in the 2016 presidential election was described with prescient accuracy by Otto.
Otto describes the war on science as being fought on three fronts:

The industrial war on science

Otto gives many examples where industries have engaged in public relations campaigns to instill doubt in the public's mind about the potentially harmful effects of their products and activities on human health or on the environment. In all cases, these industries have sought to protect their business models from regulatory disruption by developing strategies to create uncertainties about scientific findings that do not support their business models. The two best examples of this are the tobacco industry's efforts to cast doubt on the science that links lung cancer to smoking, and the fossil fuel industry's efforts to create doubt about the link between CO2 emissions from fossil fuel burning and global warming.

In December 1953, shortly after the first major post World War II study established a link between smoking and cancer, the presidents of four of the largest tobacco companies in the USA (Benson and Hedges, American Tobacco, Philip Morris and U.S. Tobacco) met and agreed to work together to convince the public there was no sound scientific basis linking cancer to smoking. Their companies started cherry-picking data, playing games with statistics, recruiting science contrarians and building up a strong lobby in Washington in their battle against tobacco regulation. Their efforts were largely successful, and they managed to delay strong regulation of the tobacco industry during more than three decades.
Top Exxon executives were informed of the link between CO2 emissions from fossil fuel burning and global warming as early as 1977. Exxon's own scientists even received internal funding to perform climate change research in the late 1970s and early 1980s, reaching conclusions that were very similar to those from academic and government climate researchers. The attitude of Exxon with respect to global warming changed drastically after climate scientist James Hansen testified before the U.S. Senate committee in June 1988, saying that global warming due to the extra greenhouse effect from fossil fuel burning was already happening.
Hansen's testimony shook the planet! Six months later, the Intergovernmental Panel on Climate Change (IPCC) had been created. Its main task was to determine the state of knowledge about climate change science, impacts and mitigation by assessing the entirety of the peer-reviewed scientific literature on these topics.
Feeling that its vested interests were threatened, Exxon reacted by beginning to fund climate change denial and public relations campaigns that would emphasize uncertainties in the scientific conclusions about global warming caused by greenhouse gas emissions from fossil fuel burning. Another key player of climate science denial is Koch Industries, led by Koch brothers David (now deceased) and Charles. The Koch's have generously funded libertarian and conservative think tanks and public relations firms during decades, including the Heartland Institute, to emphasize uncertainties in climate science and delay any regulation that would limit or reduce their activities in the fossil fuel industry. The gory details of these industrial misinformation and disinformation campaigns are described in Otto's book, as well as in another book: "Merchants of doubt" written by science historians Naomi Oreskes and Eric Conway. 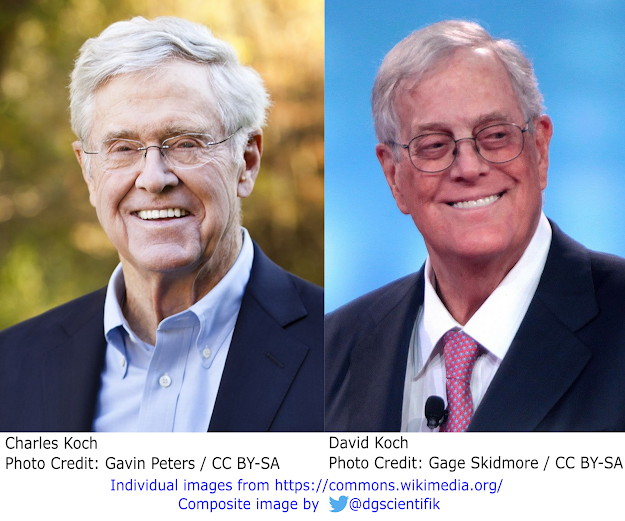 Fossil fuel industries (coal, oil, natural gas, refineries, pipelines) donated massive amounts of money to the Republican Party in the 2016 election, and will do so again in fall 2020. They want to avoid carbon pricing and regulation of their business model at all costs, regardless of what science has to say about global warming, melting glaciers and ice sheets, and rising sea level.

The religious/ideological war on science

Otto begins his account of the religious war on science by telling the dramatic story of Galileo Galilei, who was sentenced to house arrest by the Catholic Church in 1633 for the rest of his life (9 years) for promoting heliocentrism, according to which the Earth and planets revolve around the Sun. At that time, the Church adhered to the Aristotelian geocentric view that all heavenly bodies (including the Sun) revolve around the Earth.

Jumping to the 20th century, he then follows with a detailed account of the rise of American Christian televangelist Billy Graham. With an estimated lifetime audience of about 2.2 billion people over his six decades of radio and television broadcasts, Graham has been a very influential preacher. Graham associated science with all the ills of modern society, and he associated science with man's turn away from God. In September 1949, one month after the Soviet Union announced its first successful nuclear bomb test, Graham told a worried audience: "Now that Russia has the atomic bomb, the world is in an armament race driving us to destruction". The time to accept Jesus was now or never. As many other evangelists have done before and after him, Graham skilfully exploited people's anxiety feelings in the face of an uncertain future life and after-life. You'd better get ready for the Rapture because the end of the world is near (I am being sarcastic), have said countless preachers since times immemorial...
Darwin's mechanism of evolution represents a major bone of contention with people from religious affiliations who believe in the literal (exactly as stated) account of creation in the Bible's book of Genesis. Note that I refrained from using the expression "theory of evolution", because in popular language the word theory refers to something unproven and for which we have little evidence. Darwin's mechanism of evolution has been confirmed numerous times: the rapid evolution of weeds that are now resistant to Monsanto's herbicide glyphosate, the emergence of bacteria that are now resistant to penicillin and other antibiotics, the taming of Russian silver foxes, and so on.
Fundamentalist Christians, under the guise of offering a pseudo-balanced approach to the teaching of evolution, are constantly pushing for the inclusion of Creationism and intelligent design in biology courses. But biology courses are supposed to be science-based, and creationism / intelligent design belongs to the realm of religious dogma, not science.
With respect to climate change science, many (not all) evangelical Christians adhere to the Cornwall Alliance's Evangelical declaration on global warming, which denies the contribution of fossil fuel burning to global warming and calls against any type of regulation of fossil fuel industries, almost as if it had been written by the communications branch of Koch Industries. Theologically, this stance on global warming comes from a narrow, cherry-picked interpretation of Genesis 1:28 in the Bible: “And God blessed them, and God said unto them, Be fruitful, and multiply, and replenish the earth, and subdue it: and have dominion over the fish of the sea, and over the fowl of the air, and over every living thing that moves upon the earth.” One champion of this interpretation of the Bible is former EPA administrator Scott Pruitt, who went public saying that “the biblical world view with respect to these issues is that we have a responsibility to manage and cultivate, harvest the natural resources that we’ve been blessed with to truly bless our fellow mankind”.
In his encyclical letter Laudato Si', Pope Francis draws more broadly from other parts of the Bible and arrives at a theological conclusion that is very different from that of the Cornwall Alliance. His bottom line is that humans, in addition to having the privilege of benefiting from Earth's bounties, also have the responsibility of looking after the well-being of Mother Nature and their brothers and sisters from all nations who will suffer the impacts of climate change.
While not all evangelicals and fundamental Christians align with the Republican Party, a majority do. They are highly mobilized politically and do go out to vote on election day.

The identity politics war on science

On the identity politics battle front, also called by Otto the postmodernism front, the attack on science consists in denying science its objectivity: "academics and reporters insist that all truth is subjective or derivative of one's political identity group". While science aims to be objective, postmodernists like Jacques Derrida hold the view that there is no such thing as objective truth, and any claim of objectivity is suspect. Like any approach to knowledge, science must be deconstructed to expose its hidden biases and assumptions. "In postmodernist thinking, the nature of knowledge is inseparable from the knower".
Unfortunately, journalism schools teach the postmodern mantra that there is no such thing as objectivity. Yet, "while it may not be possible to attain total objectivity, approaching it is what science is all about". The majority of reporters and editors with humanities majors took few or no science classes in college. These science-illiterate journalists are often unable to discern between sound scientific knowledge and opinion. One consequence is that they tend to give as much space in their reporting to climate scientists as they do to climate change contrarians. These journalists suffer from a "false balance syndrome", which occurs when two sides are given equal coverage and credibility when in fact the weight of the scientific evidence is on one side.

Science journalists work differently; they understand that if the vast weight of the evidence is on one side of the argument, that's the side that should get the vast majority of their reporting. They don't suffer from the false balance syndrome that other science-illiterate journalists suffer. Unlike former EPA administrator Scott Pruitt, science journalists would never propose that climate science should be debated along the political affiliation lines of a Blue Team and a Red Team...

The war on science is being waged by 1) powerful industrial groups that do not want to see their business models regulated by government; 2) religious groups and preachers that refuse to accept the demonstrated evolution of species or that the Earth is 4.5 billion years old; 3) postmodernists who cannot discern between scientific knowledge and opinion, convinced that all opinions have equal value and deserve the same attention.
In our 2020 world of rampant disinformation on social media and elsewhere, Shawn Otto asks this question: "will we, the people, remain well enough informed to be trusted with our own government?" A running list of attacks on science by the Trump administration is maintained by the Union of concerned scientists.