Full disclosure:
I am a Canadian federal government scientist. Canada's Public Service Commission (PSC) provides several examples of non-candidacy political activities that public servants may engage in outside office hours during an election. This includes "using blogs, social networking sites or a personal website or video sharing to express personal views in support of, or in opposition to, a candidate or a political party." But as a preliminary step, public servants are asked to use a Self-Assessment Tool to determine the risks of engaging in non-candidacy political activities. I used this Tool and obtained the risk level "Moderate" for my intention to use a blog and social networking in opposition to a candidate or political party. I considered that this risk level was sufficiently low to allow me to write this blog post and to engage in related political activity on both my Twitter and Facebook accounts during the 2019 federal election campaign.

Canadians will elect 338 Members of Parliament (MP's) on October 21, 2019. In this post, I explain why the Conservative Party of Canada (CPC) cannot be trusted for taking meaningful, effective actions to mitigate climate change. I also raise concerns about Andrew Scheer's anti-science, anti-expertise mindset before Canadian voters cast their votes in ballot boxes on Monday. Finally, I propose a form of strategic voting for ridings in which vote splitting among Progressive parties (Liberal, NDP, Green, Bloc Québécois) plays to the advantage of the Conservatives.


Under Stephen Harper's leadership, the Conservative Party delayed any action that could have significantly reduced overall GHG (greenhouse gas) emissions in Canada during the nearly 10 years they governed the country (2006-02-06 to 2015-11-04). Harper's Government, and therefore Canada, was among the "bad players" that tried to and ultimately derailed international climate change negotiations at COP 15 during the Copenhagen Summit of 2009. Most unfortunately, this sabotage of the Copenhagen climate meeting made us all lose six precious years before real progress was accomplished with the adoption of the Paris Agreement in 2015.

Furthermore, Harper exerted a very tight control on interactions between government scientists doing climate change research and conventional media (print, radio, TV). When contacted by a journalist, federal government scientists had to fill a form in which a list of questions and proposed answers had to be sent to Departmental headquarters in Ottawa for examination, revision and approval. After a delay of a couple days or more, the interview's approval often came in too late for the journalist who had already published his/her story by contacting university scientists when someone with similar expertise could be found. As a result of this Conservative red tape surrounding interviews, journalists quickly learned it was best for them to ignore government scientists altogether, effectively silencing/muzzling them.


In the general elections of October 19, 2015, Justin Trudeau's Liberal Party won 184 seats in the House of Commons. Trudeau was sworn in as Canada's 23rd Prime Minister on November 4, 2015. Just two days later, I and my fellow research scientists from the Department of Fisheries and Oceans were called in for a meeting where we would be informed of the new Communications policy. It was a remarkably simple policy.

"If a journalist calls you for an interview, and you are the subject matter expert best positioned to answer his/her questions, from now on you can give the interview without seeking any form of pre-approval from your regional office or the Ottawa office. After you have given the interview, we simply ask that you inform our Communications Direction about the topics covered in the interview, the name of the journalist, the name of the media, and the anticipated date of publication."

Nordhaus began his economics modeling work on carbon dioxide emissions taxes as a way of limiting global warming in the mid 1970s. Ever since, he has been a strong advocate of the use of a uniformly applied carbon tax as the best way of putting a cost on the use of burning fossil fuels in order to reduce greenhouse gas emissions. Economists now generally agree that carbon taxes are the most efficient and cost-effective way to curb climate change, with the least adverse effects on the economy.

Unfortunately, Andrew Scheer does not accept such expert advice from economists on how to best tackle climate change. Instead, he prefers huddling with fossil fuel company CEOs who are opposed to carbon taxes. Scheer's decision to eliminate the federal carbon pricing backstop in Canadian provinces that have not enforced their own equivalent or more ambitious carbon tax or cap-and trade system is purely ideological. It is not based in any way, shape or form on what economics science says would be required to achieve substantial GHG emissions reductions.

Mark Jaccard, energy economist and Professor of sustainable energy at Simon Fraser University, frequently evaluates promises made by politicians to reduce greenhouse gas emissions. Using the Liberal Government's programs and policies, he finds that CO2 emissions under current government policies decrease between 2020 and 2030, but not enough to reach the Paris Agreement Nationally Determined Commitment (NDC) for Canada of a reduction of 30% relative to 2005 levels by year 2030. Consequently, the Liberals will have to develop and implement additional CO2 emission reduction measures in order to reach Canada's NDC.

But things are much worse for the proposed Conservative Party climate policies. Even under the assumption that oil sands production in Canada would not grow appreciably, Jaccard finds that "the removal of carbon pricing and key regulations, and their replacement with voluntary programs and modest subsidies, would lead to Canadian GHG emissions that continue to increase between 2020 and 2030." 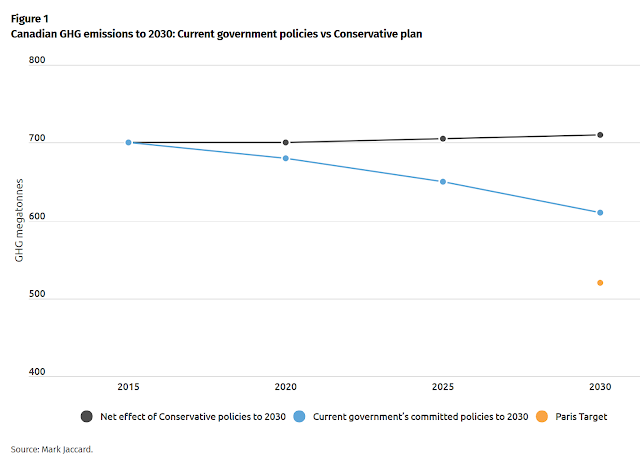 This has led climate scientist Katharine Hayhoe and economist Andrew Leach to give the Conservatives an F grade (failure) for feasibility when they assessed the ambition and feasibility of climate plans from the four major national parties. Moreover, the Conservatives get a D grade for ambition, by far the worst grade among the four main national parties. 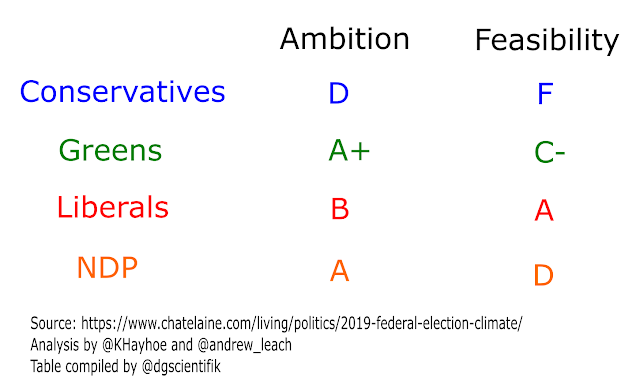 What about the other three major national parties?

With regards to Ambition (CO2 emissions reduction target), the Green Party comes out as best student of the class with an A+ grade, followed by the NDP with an A and the Liberals with a B grade. And in terms of Feasibility, Hayhoe and Leach rank the Liberals' climate plan to the top of the class with an A grade, and offer lower grades for the Greens and NDP whose proposed policies do not fully take into account the tricky issue of provincial versus federal jurisdiction. To sum up, the Liberals climate action plan is not quite as ambitious as those of the Greens and NDP, but is considered more feasible because proper account is being made of provincial versus federal jurisdictions. The Greens, Liberals and NDP all got passing marks or better at the Hayhoe-Leach climate policy exam.


Not taking seriously the expert advice of IPCC (Intergovernmental Panel on Climate Change) scientists about the urgency of reducing CO2 emissions is not the sole example of Andrew Scheer ignoring best scientific advice. His anti-science, anti-expertise mindset also manifested itself when he criticized the new Canada Food Guide, which is based on the best dietary science and medical science advice available to us in 2019. 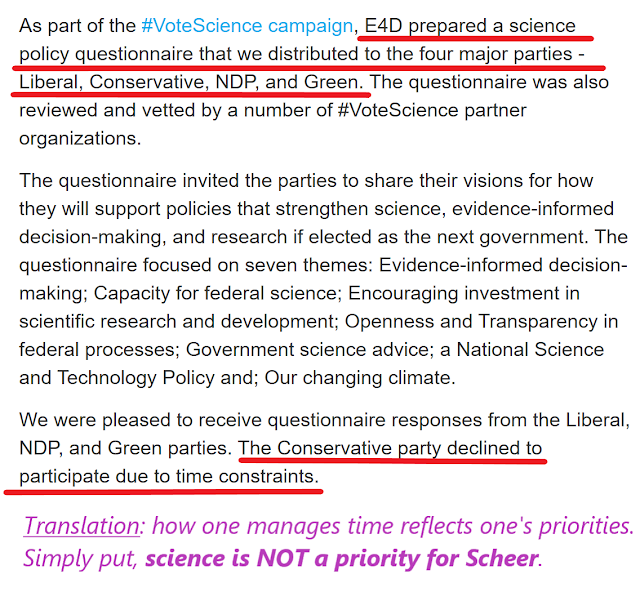 Anyone who knows anything about time management understands fully what that means. When something is a priority, you make time for it. Period. When Stephen Harper was Prime Minister, he was not particularly keen to look for scientific advice, and it appears Scheer is no keener about scientific advice than his predecessor was.


The Conservative Party is hardly affected by right-wing vote splitting, given that the Populist Party of Canada (leader Maxime Bernier) only counts on about 3% of national voting intentions. On the other hand, vote splitting represents a very serious problem for all Progressives in Canada. Based on the latest polls, the sum of voting intentions in favor of the Liberal, NDP, Green and Bloc Québécois parties is around 65%. Yet if Progressives don't invest time to look at the bigger picture and stubbornly stick to their preferred Party, they risk letting the Conservatives win the largest number of seats in the House of Commons. While this does not necessarily mean the Conservatives will be able to form a Government and win a confidence vote in the House of Commons, the prospect of Andrew Scheer being handed the largest number of seats in Canada's Parliament is a scary thought for those of us involved in the fight against climate change.

So, what should Progressive voters concerned about climate change do?