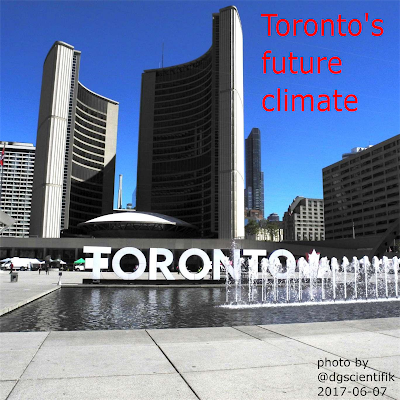 Through this portal, decision makers in the private sector, municipalities, provincial and federal departments are now better equipped to make informed decisions about future development options all across Canada, taking into account projections of future climate change.

In this post, my goal is simply to illustrate the types of climate data that are available for thousands of municipalities by taking the example of Canada's largest city: Toronto. A second example is provided for the city that I live in: Rimouski (in French). I encourage decision makers to explore what information ClimateData.ca has in store for the communities they live in. Are there any takers of this challenge for Vancouver, Halifax, Calgary or Tuktoyaktuk?

All results displayed below come from an ensemble of 24 climate models.


How hot will it be in Toronto during the hottest day of the year? If we want the answer to be something less than 40°C, we will need to steer away from the worst case scenario RCP8.5 pathway. 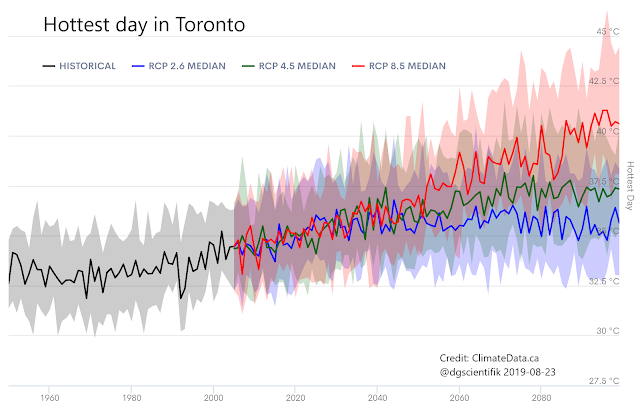 OK, OK, looking at the hottest day of the year is a bit extreme, isn't it? How many days will have maximum temperatures above a given threshold? Let's pick a threshold of 30°C for example. We've historically had 20 to 30 days per year with maximum temperatures above 30°C. But if we do not address global warming seriously, this number might go up to 80 days by 2100 if we take the high-end CO2 emissions RCP 8.5 pathway. 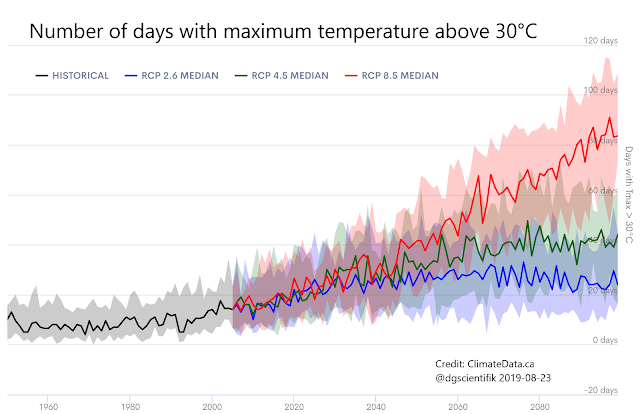 The increased number of warm summer days will require more frequent use of air conditioning in businesses, homes and apartments. This will imply more expensive power bills in the summer months in comparison with the historical period. 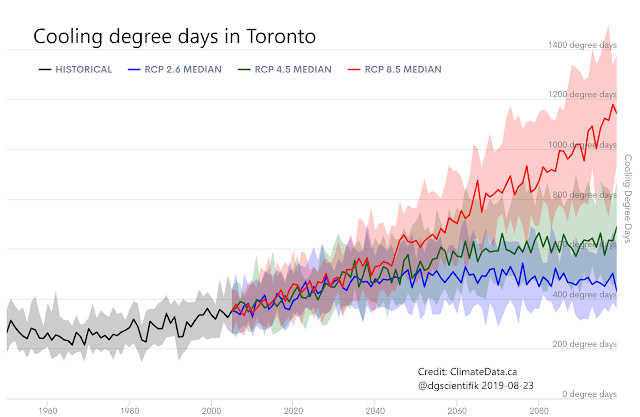 For people without access to air conditioning, the greatest amount of discomfort and health risk associated with summer heat waves has to do with warm tropical nights during which temperature never drops below a certain threshold (say 20°C). In order to avoid sleepless nights, more and more people will need air conditioning in the next decades. 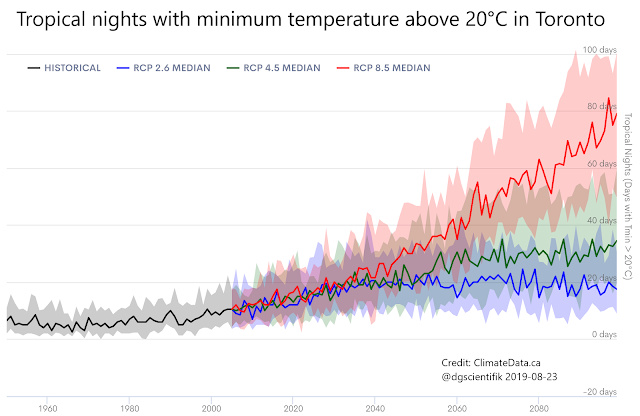 The increased warmth may present opportunities to grow new crops in the Toronto area, such as new varieties of grape for example. But adequate precipitation will be needed if these new crops are to succeed. 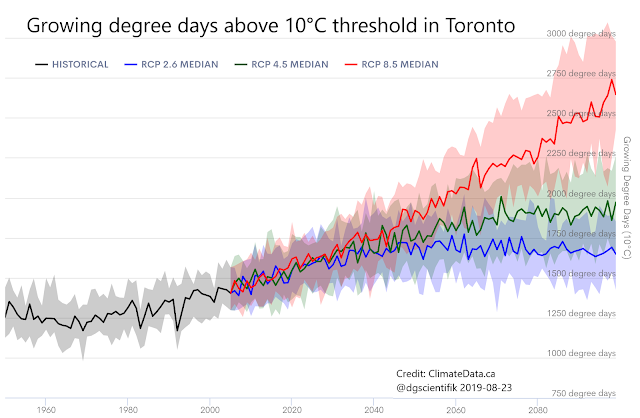 
As a general rule, winter conditions in Toronto are projected to get milder. Whereas the coldest day used to be around -23°C, under the RCP 8.5 (RCP 4.5) pathway, the coldest day of the year would be around -10 °C (-15°C) by the end of the century. 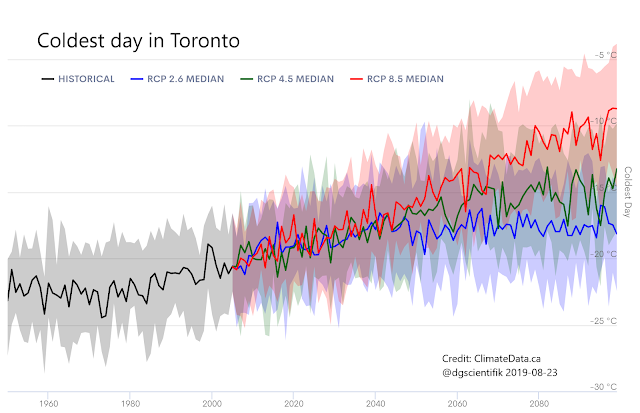 Moreover, the number of days with minimum temperature below the -15°C threshold, which was historically about 15 days, will dwindle to close to zero. 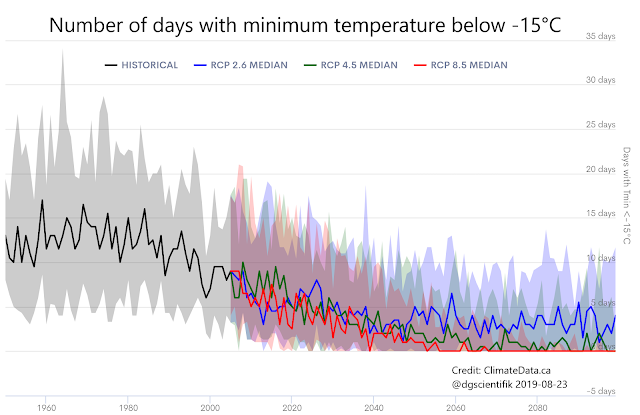 Consequently, the total number of frost days will also be decreasing. 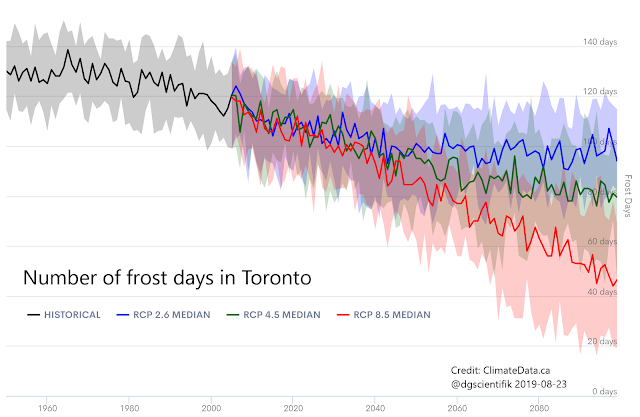 And winter power bills are expected to get cheaper due to a decrease in the number of heating degree days. However, the decreased cost of heating in the winter will be at least partially offset by the increased cost of air conditioning in the summer. 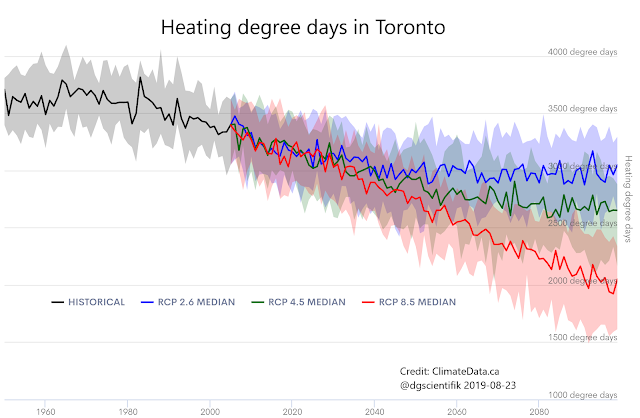 
Under global warming, the water cycle should intensify, leading to increased total precipitation. 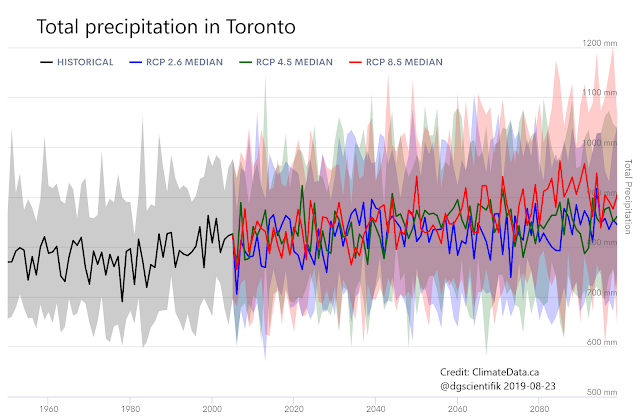 Some of this extra rainfall will be delivered in the form of extreme rainfall events. 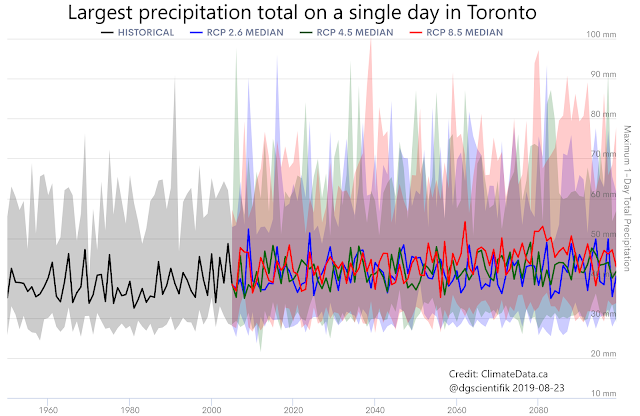 Climate models are mathematical representations of the real physical climate system. These models have intrinsic uncertainties built into them. But it turns out those model uncertainties are smaller than uncertainties about what will be humanity's future greenhouse gas emissions (RCP 2.6, RCP 4.5 or RCP 8.5). Individual persons, businesses, municipalities and Canadian provinces can help move the needle in the right direction (RCP 2.6), towards much smaller CO2 emissions.