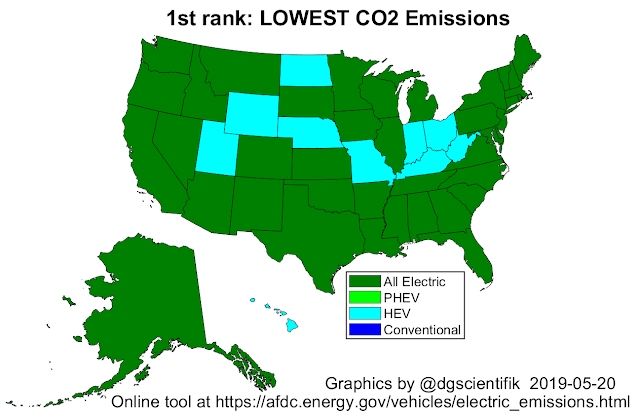 One of the main reasons explaining the rise in popularity of electric vehicles (EVs) is that they do not directly require the burning of fossil fuels in order to take us from point A to point B. In other words, EVs have the potential of helping us reduce CO2 emissions that are responsible for human-caused global heating.

However, if the power grid from which we charge EVs requires the burning of fossil fuels (coal, natural gas, oil) in order to generate electricity, are we better off in terms of CO2 emissions to the atmosphere? It depends.


Using grid electricity is not always the only choice for EVs; a growing number of people install solar panels on their house's roof and store excess energy in home battery storage systems. This enables them to recharge their electric cars with 100% renewable energy regardless of which state they live in. But for those who must rely on grid electricity, the U.S. Department of Energy's Alternative Fuels Data Center has set up a website that compares an electric car's CO2 emissions relative to hybrid and conventional cars, using each state's average electricity mix.

On this web page, the first thing we see are the national averages of annual CO2 emissions for four categories of vehicles: 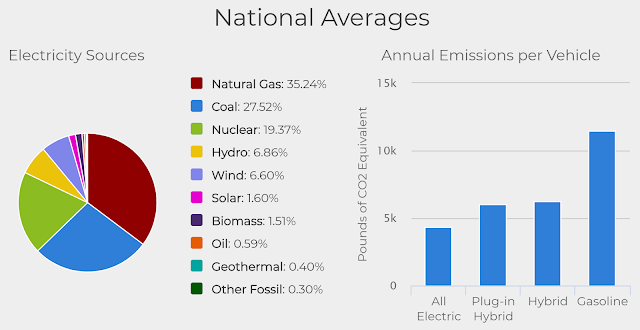 On average across the USA, it turns out All-electric vehicles (BEV) emit the smallest amount of CO2 to the atmosphere. PHEV and HEV are very close to each other with only a small advantage in favor of the PHEV. And the conventional gasoline burning vehicle emits almost twice as much CO2 to the atmosphere compared to the PHEV and HEV, and close to three (2.62) times as much as an all-electric vehicle.

But that's a national average, and this does not tell us much about California, New Hampshire or Illinois for example. All we need to do is click the "Choose a State" button, and this allows us to quickly visualize if we live in a state where a BEV or PHEV emits less CO2 than an HEV or conventional vehicle. For brevity, the only two states whose results are presented here are those with the lowest and highest levels of CO2 emissions from electricity sources. 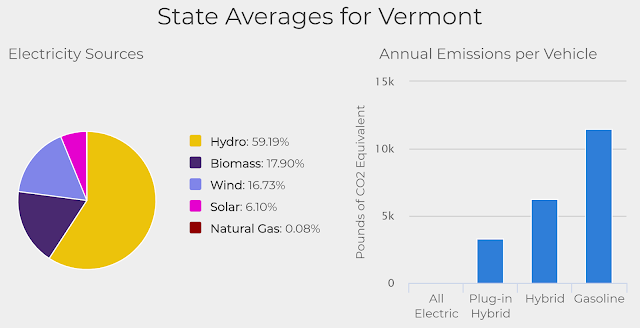 In Vermont, renewable forms of energy (hydro, biomass, wind, solar) are responsible for more than 99% of electricity generation. Consequently, well-to-wheel CO2 emissions (see definition at end of this post) for an all-electric car are essentially zero in Vermont. Plug-in hybrids emit the second least amount of CO2. An HEV in Vermont emits about twice as much CO2 as a PHEV, and a conventional car emits about twice as much CO2 as an HEV. 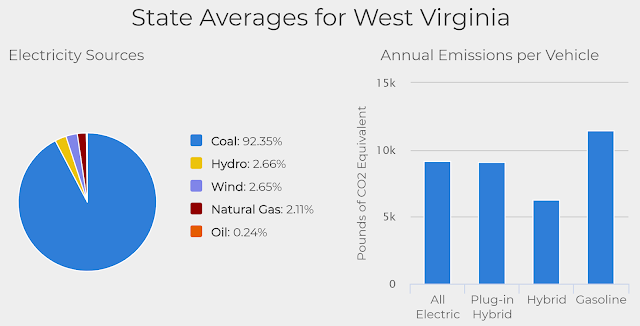 In West Virginia where 92% of electricity sources come from coal, the vehicle type with the lowest carbon footprint is the HEV, because it is never connected to the power grid. One would need reasons other than reducing CO2 emissions, such as enjoying a silent drive or the exhilarating acceleration and low center of gravity of a BEV, in order to justify purchasing one.


For each of the 50 states, we can find out what vehicle type emits the least amount of CO2 to the atmosphere, and determine what vehicle type finishes second, third and fourth in increasing order of CO2 emissions. The results are displayed in the four maps below. 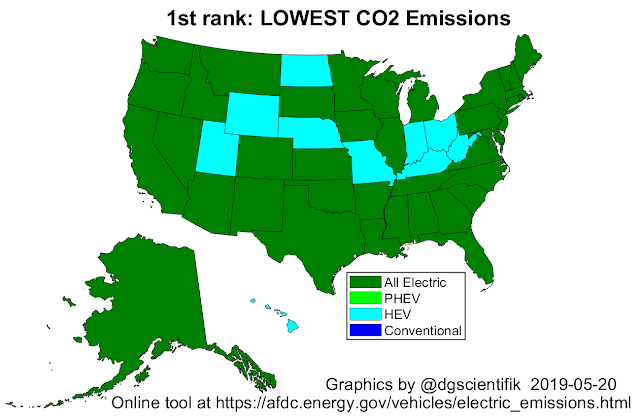 It is interesting to find that all-electric vehicles (BEVs) emit the least amount of CO2 in 40 states. Hybrid vehicles (HEVs) are the most ecological choice in the remaining 10 states that are heavily dependant on coal as an electricity source. 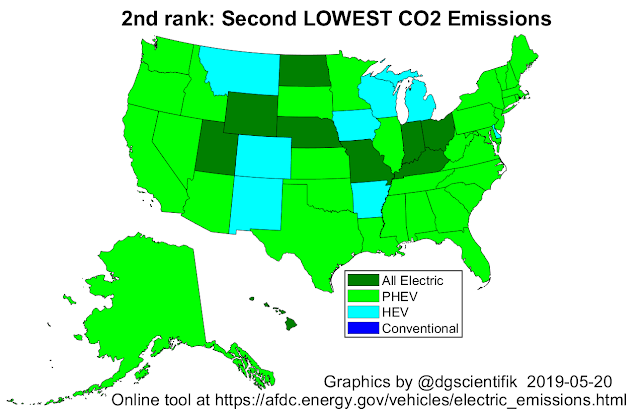 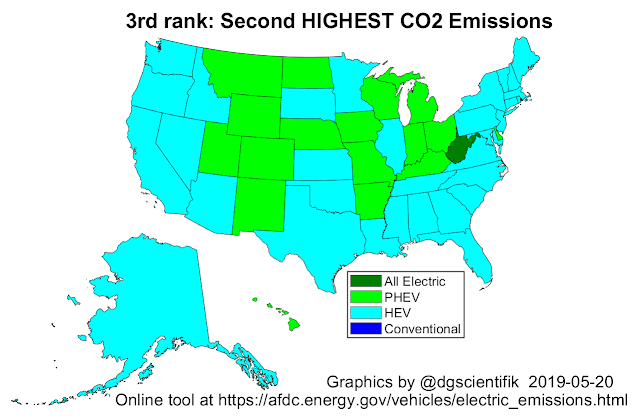 HEVs are the dominant vehicle type occupying third rank, with 33 states. PHEVs come in third place in 16 states, and all-electric vehicles occupy third rank in only one state: West Virginia. 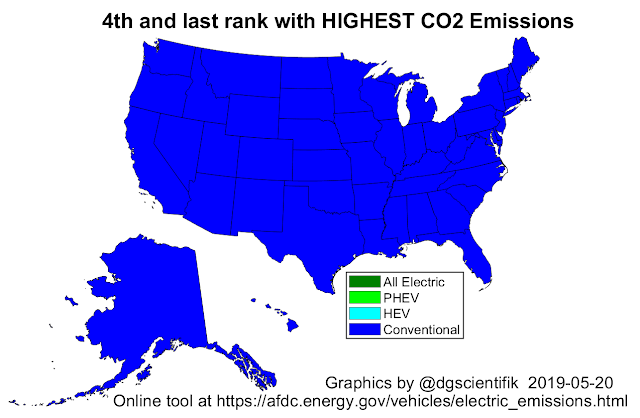 The map displaying fourth and last rank is boring but nevertheless revealing. All 50 states have conventional cars as their most intense CO2 emitters.


Readers interested to learn more can visit this other USDE webpage, which provides technical and methodological details about electricity sources and annual vehicle CO2 emissions that were assumed in the calculations. The USDE online tool presents average values for sales-weighted model year vehicles. Of course, not all PHEVs have the same electric range. Some PHEVs have as little as 15 miles of electric range whereas others have 50 or more miles of electric range. For example, a Chevy Volt or Honda Clarity PHEV may have CO2 emissions that are very close to those of a BEV. In order to better understand and interpret the mapped results presented above, it is important that you read the section on direct (tailpipe) and well-to-wheel emissions from the USDE web page, copied verbatim below for completeness.


Vehicle emissions can be divided into two general categories: air pollutants, which contribute to smog, haze, and health problems; and greenhouse gases (GHGs), such as carbon dioxide and methane. Both categories of emissions can be evaluated on a direct basis and a well-to-wheel basis.

Well-to-wheel emissions include all emissions related to fuel production, processing, distribution, and use. In the case of gasoline, emissions are produced while extracting petroleum from the earth, refining it, distributing the fuel to stations, and burning it in vehicles. In the case of electricity, most electric power plants produce emissions, and there are additional emissions associated with the extraction, processing, and distribution of the primary energy sources they use for electricity production.

October 20, 2019
Updated 2019-10-21.  Full disclosure:   I am a Canadian federal government scientist. Canada's Public Service Commission  (PSC) provides several examples of non-candidacy political activities that public servants may engage in outside office hours during an election. This includes " using blogs, social networking sites or a personal website or video sharing to express personal views in support of, or in opposition to, a candidate or a political party ." But as a preliminary step, public servants are asked to use a Self-Assessment Tool  to determine the risks of engaging in non-candidacy political activities. I used this Tool and obtained the risk level "Moderate" for my intention to use a blog and social networking in opposition to a candidate or political party. I considered that this risk level was sufficiently low to allow me to write this blog post and to engage in related political activity on both my Twitter and Facebook accounts during the 2019 fede
Post a Comment
Read more