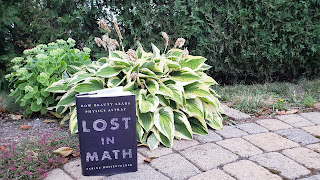 In May 2017, I ran across an intriguing Physics paper1 that claimed to explain the observed value of the cosmological constant using ingredients drawn from the theories of general relativity and quantum mechanics. This paper had garnered a large amount of public attention, and I thought it would be fun to read through it and then report back on the paper's main findings to the "Club d'astronomie de Rimouski", of which I am a member. This paper was outside my field of expertise (physical oceanography), filled with mathematical notations that I was not familiar with, so that I quickly felt the need to look for a critical assessment of it by a physicist specialized in cosmology. Google searches eventually led me to a Backreaction blog post2 by Sabine Hossenfelder. Her post contained a healthy mixture of positive and more critical comments about this 'hot off the press' paper proposing an explanation for the cosmological constant. I immediately liked Sabine's direct, funny, honest writing style and began following her on Twitter.

Now fast forward one year, and I end up purchasing a copy of Sabine's very first book3, in which she explores some of the difficulties encountered in contemporary theoretical physics, especially in the areas of elementary particle physics and cosmology.

The standard model of particle physics

In 2012, the joint discovery of the Higgs boson by two teams of experimental physicists at the Large Hadron Collider (LHC) in Geneva provided conclusive evidence for the 25th of the 25 particles of the standard model of particle physics, whose development began in the 1960s and was largely completed in the 1970s. In the standard model, the Higgs boson's task is to give mass to some (but not all) of the 24 other standard model particles. Physicists were confident they would eventually find the Higgs boson, but were lacking theoretical guidance as to what its mass (and energy, through Einstein's E = mc2) should be.

Ever since the LHC was built, many physicists were also hoping to discover new physics and observe new types of particles beyond the 25 particles of the standard model. In fact, several physicists were so confident that new supersymmetry particles would soon be found at LHC that they placed a bet on it. But in 2016, those who won the bet (a bottle of cognac was at stake) were the ones who predicted the absence of supersymmetry particles at the LHC4.

One the main reasons for which so many physicists were convinced the LHC would reveal new particles beyond the standard model comes from the current "state-of-the-art" mass and energy budget of the observable Universe.

The best fit of observations of the cosmos to the mathematics of Einstein's general relativity are consistent with a worldview in which 'dark energy' constitutes 68.3% of the total matter-energy budget of the Universe. Astronomers' measurements indicate that the remaining 31.7% is made up of matter, which physicists further break down into two categories: 'dark matter' (26.8%) and ordinary matter (4.9%). While ordinary matter is made up of the 25 particles of the standard model of physics, the fundamental nature of dark matter remains a mystery, though theories abound as to possible candidates that would only very weakly interact with ordinary matter. And some of those theories predict that we should already have seen dark matter particle candidates at the collision energies that have been achieved at the LHC, but we have not. So what gives? Sabine largely blames theoretical physicists' biases and preferences for mathematical theories that they find simple, elegant and beautiful.

Beauty - not always a good guide in physics

Beauty is an acquired taste that involves cultural values as well as one's lifelong training and interests. Throughout their professional careers, most theoretical physicists have acquired a sense of beauty for mathematics that they find elegant, simple, and, well, beautiful...

Trouble is, simplicity does not always win. Planets' orbits around the sun would be simpler if they were perfectly circular, but observations show they are rather elliptical.

I am a physicist, but am not a specialist in either particle physics or cosmology. I specialized in the physics of Earth's ocean and atmosphere. Consequently, I am in no position to judge on the adequacy of supersymmetry or string theory, of which I frequently hear about or read about in popular science TV shows or magazines.

As we read "Lost in Math", we follow globetrotter Sabine as she goes from place to place to discuss about cutting-edge fundamental physics with renowned physicists, including a few Nobel prize winners. She interacts with them, asking for their views as to why we have not yet seen evidence of particles beyond the standard model at the LHC and other ongoing experiments. She also asks questions that help clarify what each physicist personally considers beautiful. To which Steven Weinberg famously replied that a good horse breeder can immediately recognize a beautiful horse when he sees one!

Large experiments such as the LHC are very expensive, and generally require many years to plan and build. Therefore, the time lag between developing and testing hypotheses has grown very large over the past 30 to 40 years. In the absence of experimental data, how are we then supposed to decide which theoretical predictions are most worthy of eventually being tested in often expensive experimental setups? On which criteria should we judge untested theories? Sabine leaves this question unanswered, but opines that the beauty and elegance of mathematical theories can be a very poor guide and often has no connection whatsoever with physical reality.

I recommend "Lost in Math" to anyone interested in fundamental science and epistemology, because many of the issues raised in the book go much beyond physics. Sabine calls for a renewed dialogue between scientists and philosophers, and recalls us that physics is not math. Physics is choosing the right math. And for that to happen, observational guidance remains necessary.