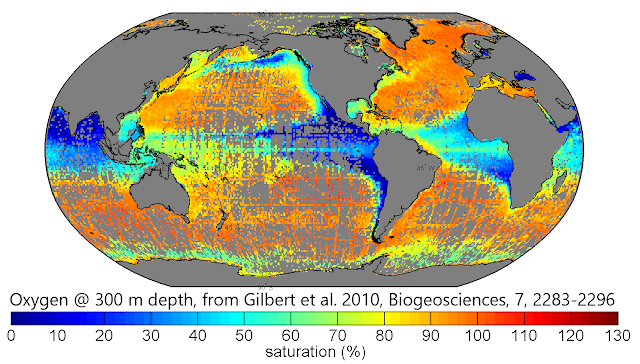 As land-dwelling animals, we breathe plentiful oxygen from the atmosphere, except perhaps if we are climbing a high mountain summit where oxygen is more scarce. But ocean-dwelling animals are often not as fortunate as we are when it comes to oxygen abundance.

To begin with, oxygen as a gas is NOT easily dissolved in water. Though a liter of seawater weighs nearly 1000 times more than a liter of air, that very same liter of water contains about 40 times less oxygen than one liter of air (0.008 g versus 0.3g). 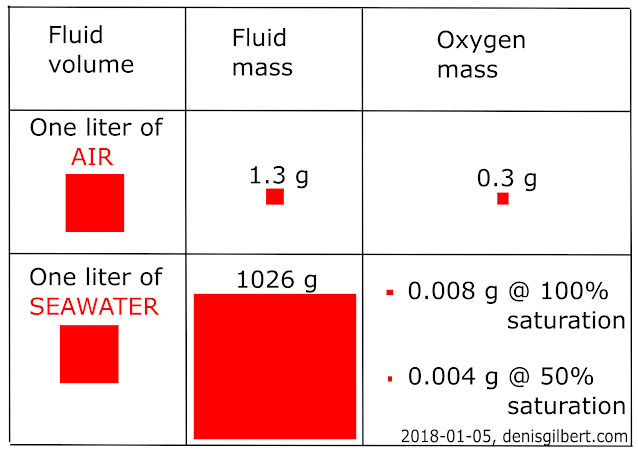 But things can get much worse than this, because below the surface layer, oxygen can litterally go down to zero. At 300 m depth, vast expanses of the ocean contain a very small percentage of the amount of  oxygen these same waters contained when they were last found at the sea surface, in direct contact with the atmosphere. This percentage gets very close to zero in the northern Indian Ocean and the eastern equatorial Pacific, and actually reaches zero in the Black Sea. 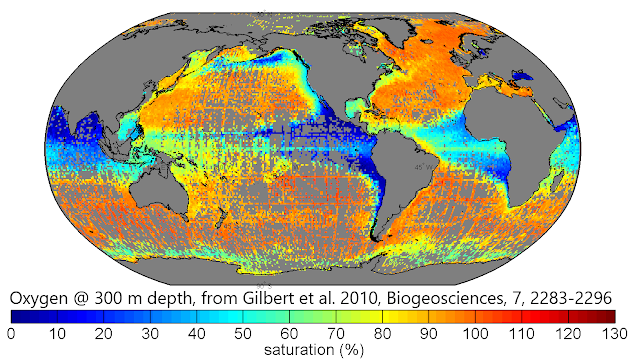 You may ask yourself why oxygen can get so scarce in the ocean interior. The ocean’s surface mixed layer is well oxygenated because of photosynthesis and gas exchange with the atmosphere. But below the sunlit surface layer, there is no photosynthesis and no direct gas exchange with the atmosphere. Oxygen must then be carried away by ocean currents from the regions of the ocean where subtropical mode waters, intermediate waters, or deep waters are formed, towards the ocean interior. The main regions of the surface ocean that export recently ventilated and oxygenated waters to the ocean interior are shown below. 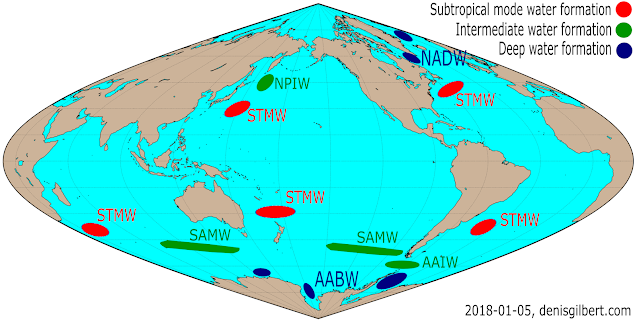 In the Southern Ocean, a surface convergence zone between about 50°S and 60°S causes local sinking of surface waters and the formation of Antarctic Intermediate Water (AAIW) which ventilates water depths between about 700 and 1200m. The Southern Ocean is also home to the formation of the densest water mass of the world ocean, Antarctic Bottom Water (AABW), formed in areas of intense sea ice freezing and brine rejection around the continent of Antarctica. AABW sinks all the way to the bottom of the three major ocean basins and propagates northward.

In the northern hemisphere, ventilation processes vary quite a lot between the three major ocean basins. The formation of North Pacific Intermediate Water (NPIW) in the mixed water region of the Oyashio and Kuroshio ventilates the upper 300 to 700 meters of the North Pacific subpolar gyre. In the North Atlantic, to the north of the Denmark-Faroe-Shetland ridge, deep convection in the Greenland-Iceland-Norwegian Sea (GINSEA) is the source of Denmark Strait Overflow Water (DSOW) that spills over the Denmark Strait sill (625 m deep) and then descends to the bottom of the North Atlantic. Some of this dense water also flows northward and propagates towards the Arctic Ocean. The Labrador Sea, and to a lesser extent the Irminger Sea, is another important site of deep water formation in the North Atlantic, with convection events reaching up to 2000 m depth. This leads to the formation of North Atlantic Deep Water (NADW) which then propagates southward. The ultimate fate of oxygen-rich NADW is to either 1) upwell into a surface divergence zone of the Antarctic Circumpolar Current; 2) ventilate the Indian Ocean; 3) ventilate the Pacific Ocean. 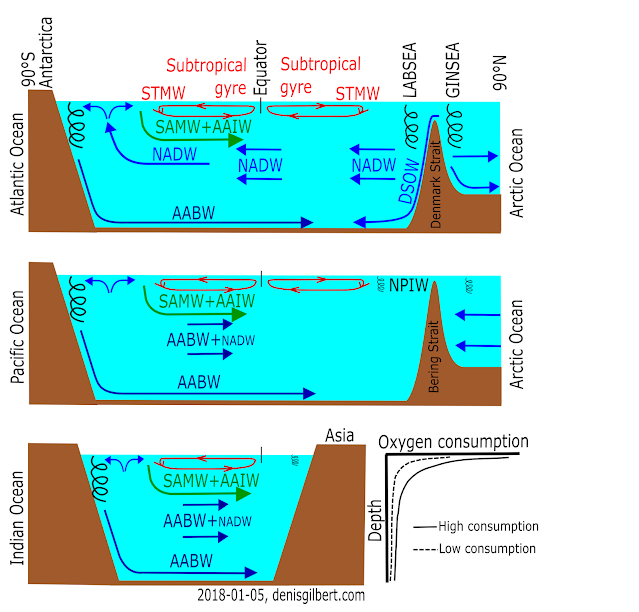 During the very long journey from its formation region in the northern North Atlantic, NADW remains isolated from the atmosphere and its oxygen content becomes progressively lower as we get further away from its source region. In the Indian and Pacific Oceans, a mixture of NADW and predominantly AABW propagates northwards. No deep water formation takes place in the Pacific and Indian Ocean,  so that they are less well ventilated than the North Atlantic and have lower oxygen content, as can be seen in the South to North sections of the three major ocean basins shown below.

Projections from Earth System Models that simulate global warming from rising CO2 levels indicate that ventilation processes will likely become more sluggish in the next decades. Ocean scientists believe this would lead to lower oxygen levels in the ocean interior. Recent studies suggest that such reduced ventilation may already be underway. The quicker and the more aggressively we reduce our CO2 emissions, the better it will be from the point of view of oxygen availability in the ocean interior!